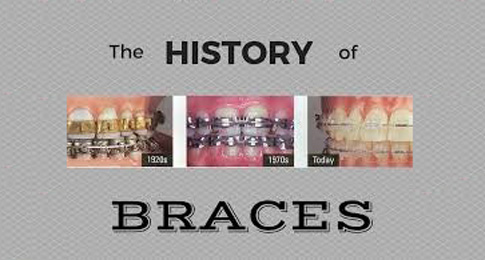 You may be surprised to learn that the pursuit of the perfect smile is not new!

Historians have found primitive braces dating back thousands of years to the ancient Egyptians, the Etruscans and the Romans. These devices were made of gold and had catgut (made from animal intestines) to act in a similar way to the wires we use now.

The first ‘modern’ orthodontic appliance was described by Pierre Fauchard, who is widely regarded as the father of modern dentistry, in 1728. This brace was designed to expand the arch and was made of a gold or silver horseshoe shaped band attached to the teeth with silk ligatures.

Fixed braces as we know them today were developed in America in the late 1800s. Edward Angle, an American dentist, devised a system from which our braces have derived. In the early 1900s braces were made of metal bands wrapped around the teeth and connected with wire. The best material for these braces was gold. As you can imagine, this was very expensive and so only the elite could afford braces.

In the 1930s stainless steel was introduced. This was cheaper than gold,but brace treatments were still very time consuming. The dentist had to make the metal bands to fit each individual tooth. These were made from stainless steel tape and welded to size. The brackets were made of stainless steel using a press or pliers and these were then welded to the bands. Finally, the band was cemented to the tooth and a wire placed. A long old job for both patient and dentist so fixed braces were still only for the wealthy.

Things speeded up a bit when manufacturers made stainless steel bands of various sizes with the brackets already attached. This meant the dentist had only to select the correct size of band for each tooth before cementing it, but this was still a lengthy procedure.

A revolution happened in the 1970s when new materials and technique allowed us to stick the brackets directly to the teeth just as we do today. This worked well on the front teeth but wasn’t so good on the back teeth, so patients still had metal bands cemented to their back teeth. The wires were still made from stainless steel and each wire had to be bent to suit the width of the patient’s dental arches. Additional bends were placed to make individual tooth movements.

By the 1980s techniques allowed us to work more quickly and so more patients were starting to have fixed braces.

In the 1980s and 90s brackets became more sophisticated – lots of adjustments were built into the bracket so orthodontists spent less time bending wire meaning more time saving and fixed braces became more widely available. At the same time, wires were developing. New alloys became available, some as a spin-off of the space programme. Stainless steel wires needed adjustments every 4 weeks, but the new nickel titanium wires had a memory which meant gentle forces could be applied to the teeth over several weeks without the need for such frequent adjustments.

This was a big step forward for orthodontists and their patients – the patients didn’t have to visit the surgery so often which meant the orthodontist could take on more patients.

For the last 30 years or so it has become common to see teenagers wearing fixed braces. As technology continues to advance, the design of braces will continue to evolve. Orthodontics has changed dramatically since your grandparents’ day – I wonder what your grandchildren will be wearing to straighten their teeth!